Home > Cookery Masterclass > French Classics to Cook at Your Group

French Classics to Cook at Your Group 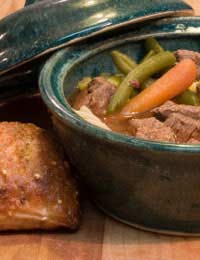 France has one of the world’s most famous cuisines. Adopted by many British chefs in the 1980s it is the source of classics like Ratatouille, Cassoulet, Salad Nicoise, Brioche, Tartiflette, and Chocolate Torte.... we could go on, but you must be hungry. For this Cookery Group Masterclass, elect one or two members to research and present a few French classics for the group’s education and enjoyment. Then share the recipes and discuss your experiments. Bon Appetit!

The peasant regions of France are a rich mine for stew dishes, rich in seasonal produce and local meat or seafood. Try perfecting some of the classics:

How to Make a Great Cheesecake

Cooking Your Own Smoked Food