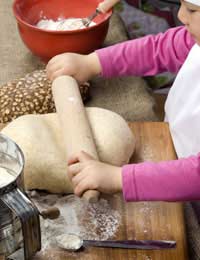 Turn your children into bakers for the day. This Cookery Group plan introduces your young chefs to the science of baking bread. There is plenty to learn and lots of intrigue as the bread rises with help from some magical yeast.

Because of the time it takes for bread to rise this session might be best for a weekend when you can plan different activities in between baking. It’s a great option for children who are asking for a cooking party – there’s plenty of time for some pass-the-parcel, and at the end, they can eat their own rolls with fresh fillings provided by the host.

For each child, you will need a roomy plastic bowl, a measuring spoon, a wooden spoon, a tea towel, and a wooden board. You will also need enough jugs to share between two or three, and a set of weighing scales.

In advance of the session , the host will need to warm the flour in a very low oven. You will need 4oz of flour per child. An hour before the group meeting, switch on your oven to its lowest temperature and weigh out 2oz of white bread flour and 2oz of soft grain or brown bread flour for every child who will be baking. Tip the flour into a large baking dish and leave in the oven to warm through. It should only just be warm and not hot, so check it 20 minutes before your group arrives.

There is lots of science at work behind the scenes when you bake bread! Here are some points to include in your group meeting:

Step Two: Weigh out 4oz flour for each child, or ask them to weigh it individually. When the yeast is ready, they can add the flour, as well as ½ tsp of olive oil and 1/2 tsp salt.

Step Three: Now the mixing begins! Using a wooden spoon, each child can mix up their dough, bringing the flour and yeast mixture together. At this point, walk around and check the consistency: if it's too dry add a splash more water, if too wet sprinkle in some extra flour. When it’s started to leave the sides of the bowl, then it’s time to knead by hand. Plonk the dough onto a floured wooden board and ask each child to knead for at least 5 minutes. Show your group how to knead, using the heel of your palm to push the dough against the board and away from you, before turning the dough for the next punch.

Step Four: When the dough has become soft and elastic, it’s time to shape it into rolls. Ask each child to be imaginative with their rolls, adding their initials or making a word. Finally, place each child’s rolls onto baking trays, cover with tea-towels, and leave in a warm place to rise. (Using a switched-off oven, into which you’ve put a tray of boiling water, is a good idea.) They’ll need at least an hour to double in size.

Step Five: At last, you can bake your bread. If you like, you could brush with egg or milk and sprinkle with poppy seeds or grated cheese. Bake at 180 degrees C for around 25 minutes, then cool before serving.

Packing your Own Lunch